Fire Sprinklers Save Lives at Merrill Gardens Senior Living
May 1, 2018

Renton RFA responded to reports of a fire at Merrill Gardens Senior Living over the weekend. Crews arrived to find a sprinkler head activated and the unit in question engulfed in smoke. Residents of the building had already been evacuated and quick use of a dry chemical extinguisher ensured the flames were completely out, thanks to the Merrill Gardens staff who are trained how to react in these situations.

Crews found a wood cabinet had been placed in front of a wall heater and a cardboard box had fallen between the heater and the cabinet, which ignited to start the fire. The fire was ruled accidental. Total loss for this fire (property and contents) is estimated to be around $35,000. Crews credited the building’s installation of fire sprinklers for ensuring the fire did not spread rapidly and cause greater losses for the property owner or residents.

Having a fire sprinkler system is a huge benefit to Merrill Gardens, the staff, and especially the residents. The system helped ensure everyone evacuated safely and that property damage was kept to a minimum. According to the U.S. Fire Administration, fire sprinklers reduce the risk of dying in a fire by 82 percent. Residential fire sprinklers are even more sensitive to heat than those found in commercial buildings, meaning they detect fire sooner – saving time, which save lives.

When building or remodeling a home, few people think of fire sprinklers as a potential addition. You might be surprised to find out how affordable and aesthetic fire sprinklers can be in your home. Here are some interesting facts about residential fire sprinklers you may not know:

If you’d like more information about residential fire sprinklers, come visit us on May 19th from 11:00am – 1:00pm at IKEA (map it) for Home Fire Sprinkler Day! We’ll have live fire sprinkler demonstrations, educational materials, and more. We hope to see you there! 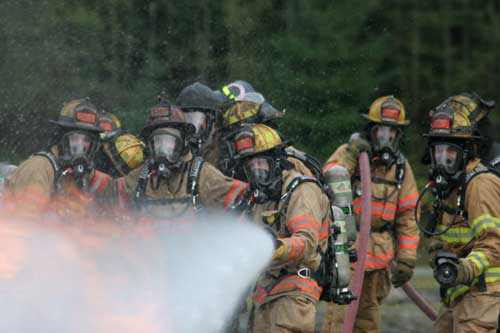