Filing a Claim for Damage

FILING A CLAIM FOR DAMAGE FORM 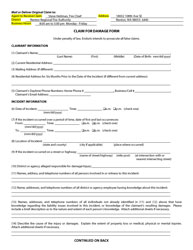 Filing a Claim for Damages

If you believe that Renton Regional Fire Authority (RFA) is responsible for damages to you or your property:

1. You must file a written claim.

2. In order to meet legal requirements, you must supply specific information. To assist you in meeting those requirements, Renton RFA has prepared a Claim for Damage form for your use.

3. Please include documentation (if available) such as copies of invoices/receipts, photographs of the damage, repair estimate, and/or medical bills. Attach the documents in PDF format, if submitting your claim via email.

4. Completed claims should be emailed, with attachments in PDF format, to adminsupportteam@rentonrfa.org. The completed claim may also be mailed to Renton RFA Administration Headquarters.

6. Administration or the claims adjuster will investigate your claim and determine to what extent if Renton RFA is legally responsible for your damages.  Generally, Renton RFA will only pay for damages when it can be shown that Renton RFA was negligent in its operations.

In accordance with state law, Renton RFA may take up to 60 days after claim submission to evaluate your claim. Claims that do not receive a response within 60 days are deemed denied.