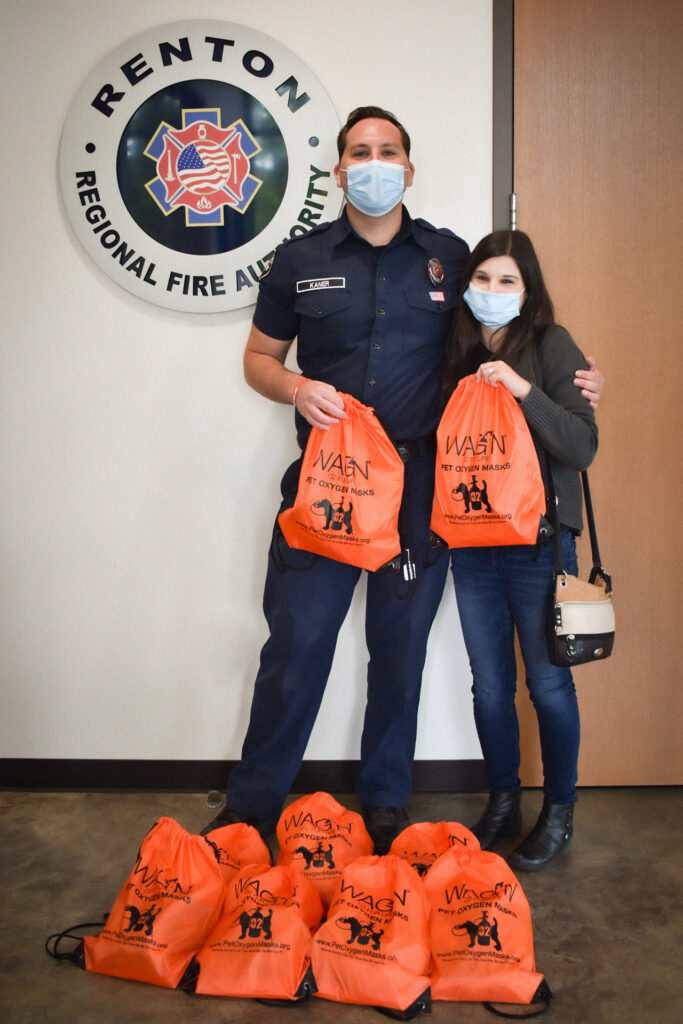 Renton RFA’s own Nathan Blakeslee has been working diligently behind the scenes with two local community members dedicated to keeping family pets as safe as the family they’re a part of. Blakeslee was put in contact with Joanna Koseff and Daniel Kaner, a local couple who saw a need to ensure that fire departments around Washington had the right resources to take care of their community member’s furry family members. He worked with them to secure pet oxygen masks for each of our fire stations.

Upon discovering that many agencies don’t have pet oxygen masks as a readily available resource on their rigs, Joanna and Daniel sprung into action to find a solution. Their goal: to make sure fire departments throughout Washington are well equipped. While Renton RFA has had pet masks, it has been some years since new equipment was procured for that purpose. Joanna and Daniel generously donated 9 masks to Renton RFA, while doing drop offs through Pierce, King, and Snohomish counties, to be distributed between the various fire stations.

We received the masks on August 27th, a timely delivery given that August 26th is National Dog Day! When asked if they have a non-profit or an organization behind this effort, Joanna and Daniel advised no – they simply saw a need and have used grass roots efforts to raise funds through personal fundraising and their GoFundMe page. Daniel’s connection to the fire department runs a bit deeper, however. He is currently serving as a volunteer firefighter for Fire District #14 and is hoping to join an agency like Renton RFA in the near future!

Our sincere gratitude goes out to Joanna and Daniel. Their dedication to helping pets through Washington is close to our hearts, as we aim to help make every life in Renton safer, healthier, and stronger every day.