It’s official! On Saturday, February 23rd, we had the distinct honor of hosting the Fire Station 15 ribbon cutting alongside the City of Renton. Officials from the City and the Renton RFA Governance Board spoke, as well as current Fire Chief, Rick Marshall, and retired Fire Chief, Lee Wheeler, who was instrumental in the early planning for Station 15 during his tenure as Fire Chief. The ceremony transitioned from the speakers to the ribbon cutting itself, where Chief Marshall was joined by Mayor Dennis Law, members of City Council, members of the Renton RFA Governance Board, and key project team members responsible for the timely completion of the Station 15 project.

Once the ribbon was cut and the large bay doors opened, the crowd filed into the new, state of the art fire station for a brief tour and light refreshments. Among those in the audience were supporters from the City, members of Renton RFA, and the community. Many community members brought their children to see the new station and say hello to the firefighters who will now proudly serve the Kennydale area. While the weather held out beautifully for the event, a community-wide open house will be held in the late spring to give all community members an opportunity to see the station and meet their new fire crews. Announcements for that event are TBA.

Fire Station 15 is one of Renton RFA’s smallest stations, coming in at approximately 7,500 square feet. However, it’s unique, modern design gives it a spacious feel, and it’s tech-forward, eco-friendly features make it the most advanced station in Renton. In addition to healthy, economic, and eco-friendly design features – such as the polished concrete flooring throughout and the large, triple pane windows, the station has several high-tech features that make it truly unique.

One feature you may not notice as you glance around the bright, spacious-feeling bay is the diesel exhaust system. This unique system connects securely to the tailpipe of the fire engine using a pneumatic bellow, providing nearly 100% capture of carcinogen particulates created when the engine starts up. This automated system senses pressure change in the pipe on engine startup to turn on and off efficiently. Another key feature tucked throughout the station is the advanced station alerting system. As a 911 call comes in, strategically placed lighting and audio alerts go off throughout different areas of the station, as well as reader boards recapping the contents of the call. In the bay, a count-up timer for the crew alerts them to the time it takes to go from the first notice of a call to exiting the station, helping ensure they meet the 2-minute standard.

The beautiful, four-fold bay doors are a departure from traditional roll doors, however, they add more than just aesthetics to the functionality of the station. These doors open faster than traditional roll doors and by retracting horizontally they allow crew members to see when they are fully open – reducing the chance that the engine will bump into them while making a speedy exit to an emergency. These are just a few of the thoughtful design elements that went into creating a station that is healthy, sustainable, eco-friendly, and economic.

One of the best features of the station, however, is the ability to now serve the Kennydale area much more efficiently. The City of Renton had the great forethought to purchase the plot of land the station was built on back in the 1990s. Through the vision of so many, in partnership with the City and with the support of our amazing community, Renton RFA has been able to deliver on the promise of a new fire station that will have an enormous impact on the lives of the people of Kennydale. In addition, the entire Renton community will receive a ripple effect of benefits, as call volumes are diverted and previously taxed stations are able to better focus their time and attention within their response area. As the Renton community continues to grow and call volumes continue to increase, Renton RFA is positioned better than ever to provide exemplary services to those in need.

Below are a few pictures from the small ceremony. Stay tuned for more information on the community-wide open house event in the spring! 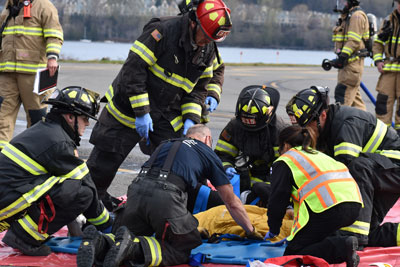